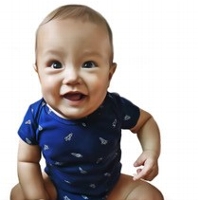 #MightyMateo’s Legacy: Sending Rescue to Children in the Philippines

...to send rescue, protection and restoration to children in the Philippines.

Mateo David Blanding was a justice warrior during his seven months on earth. He attended Justice Conference Asia, attended a talk delivered by IJM Cebu's Director of Legal Interventions, Lucille Dejito, and sat through countless meetings with his parents, Mike and Joanna, who brilliantly planned and executed a Christmas fundraiser in December 2019, "Carols for a Cause,” which raised $30,000 for IJM's work combating online sexual exploitation of children ("OSEC") in the Philippines.

Mateo's quiet and sweet spirit allowed Mike and Joanna to devote time to their passion for promoting social causes and equipping people to give effectively through their platform Giving is Social (givingissocial.com). It seemed Mateo was cheering them on in their Godly ambition to seek justice on behalf of those in the world who are suffering from abuse and violence. Mateo could not have been a more compliant companion.

No one could have dreamed that Mateo's life would end so abruptly on 16 March 2020. His passing was met with a remarkable steadfastness from Mike and Joanna, whose faith and trust in God was amplified within their community in Singapore and around the world. Not only did #MightyMateo's story (as he quickly became known) touch countless lives, it also brought people together around the world in prayer and in unity, believing first for a miracle that God would heal Mateo, and then for God's purpose to be made known in his passing.

Mateo gathered friends and strangers alike. He ushered people to the Lord. He fought hard. Mateo gave perspective when the world was panicking at the COVID-19 crisis. Mateo's life was just as his name means - a beloved gift of God.

We invite you to honour Mateo, and the desire that Mike and Joanna have "...to dedicate our efforts as a family in 2020 to the work IJM is doing. And Mateo, having been part of all the birthing of the partnership with IJM, and our learning through the process makes him an advocate himself.”

All gifts given in #MightyMateo's name (via this giving page) will be designated for IJM's work in the Philippines to combat OSEC. $30,000 is the cost equivalent of six rescue operations, which are led by IJM staff in collaboration with local authorities in the Philippines.

If you have any questions or would like to learn more, please email: lbowden@ijm.org

Get The Word Out